There is a British Tactical Bomber Wing in the middle of Russia for no good reason at start, just to mention one odd placement I noticed today - prevents me from building industry in Kologriv - damned imperialist pigs.

oh - and another thing - all of the protectorate of Böhmen-Mähren isn't cored as Germany - intended?

Thats strange, the provs are of course false. I don't know when that happened.
But what is more irritaring, when I change them to different provs, they still not show up in those..
I redirected all UK planes to Dover via the history unit files and still not all show up there.. -sigh-

And GER still got only the Sudetenland as core.
As for core that is also connected to partisans etc.. Different from what you can have a "political" claim, as cores present ingame population too.
_________________
Play WW-I up to the Cold War! Soon possible with the "AHOI-Mod"! One of the most played Mods for "Hearts of Iron 3"!
Spiele von dem WK-I bis zum Kalten Krieg!  Bald möglich mit dem "AHOI-Mod"! Einem der meistgespielten Mod für "Hearts of Iron 3"!
___- blog -___-facebook-___-twitter-___

That is odd. I noticed another issue. France has insane amounts of dissent in each and every one of my games - Soviet Union august 1936 - dissent in France 114!
Dissent in France when I looked in my Germany game beginning of 1937 - 143!

Those I found in the game above and around 10 dissent in august 1936 - but there might be more - looked at France IC wise and I can't say I understand it, it's not like with CHC - there are not too many troops for the Industry to handle, but somehow the AI makes a mess of it or they are getting sabotaged to hell and back? Once they reach a certain point anyway, there is no turning back it seems.

Good catch!
It is likely because of the laws.
Econnomy law "Full civillian" gives -40% to IC and others add on top of that limiting those to very low IC and thus raising dissent..
And I checked the dissent fight code in the production.lua wich was checked in a wrong place to have full effect.
Next to not redirecting full effort to fight dissent but still spending on upgrades.. That is vanilla design though..
Changed all of it a bit and now it seems it works.

But it will need more changes. I have a different design for the whole industry in mind for a long time.
I'll rename that whole thing CG and reuse it different where it makes more sense in regard to the effects.
As it seems only military units are directly taken into account, it can't be seriously something like consumer goods. If not enough cg are at hand, you get dissent wich will affect the available IC. So in short, "unhappy soldiers" will affect the part of the industry(!) that is producing military stuff through their unhappyness wich is shown with dissent.. While dissent also affect fighting capabilities of the units, but also political support for your government. And, of course, you produce extra consumer goods with the military availabe IC freed/converted from the civillian total(base) IC. While one could assume that the civillian industry is producing consumer goods and not the military..
But tooltips says that dissent is our unhappy population because of shortage of consumer goods..

So quite an "interesting" system.

It would have made sense if we could allocate all our free IC either through the consumer goods slider, or through laws. But redirecting parts of the military IC to consumer goods to fight civillian unhappyness is quite a feature.

Found the error in the history units files. Ending quotation marks missing for all ENG air units names.
I'm not sure how that happend though, can't remember to ever touch the names of them. And it was only in 4.04, before all was fine.. Strange..
Anyway, next version will have that fixed again.

Sounds good
Here is a picture - what is stange? - can you guess it? 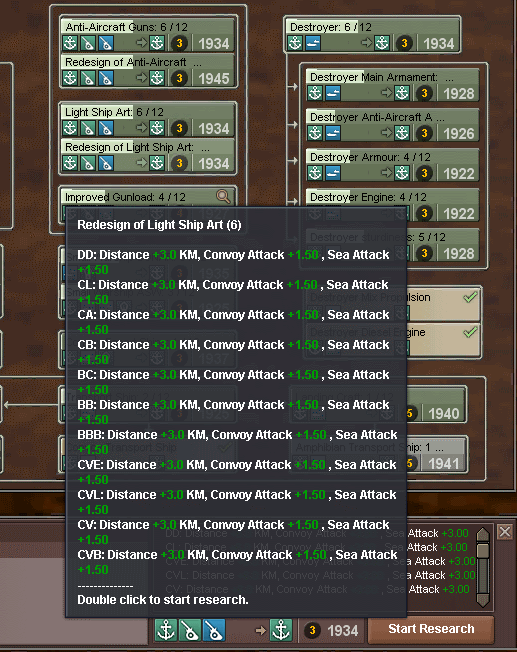 Redesign of LIGHT art (TRANS MTB DD) but this seems to add to CL CA BB BBB and so on? intended that way?

In each part of the screen you have such tech for light, medium heavy art.
So DD/MTB/TRA has light, cruiser have medium, and BB have heavy.
At the same time you can research the "general weapon layout" for each class. That way the BB can get more light/AA in the BB area. while the better light guns will be researched in the DD/MTB/TRA area.
And as a DD can't carry 20cm+ the redesign of guns there only affects the common types wich unsed that sort of guns.
And two techs are onlý for the extra hvy type of its overall class. CB and BBB, just to make clear that these two can get the extra punch if wanted.

For the new 1001 techtree spanning from WW1-CW, I had a different setup already wich could be seen here: https://ahoi-mod.forumotion.com/t20-bring-it-on
Well if imageshaq has not completely deleting my pics by now.

I figured it was something along those lines, but I had to ask, since one could argue that for purposes of keeping track of research with limited leadership, one would naturally consider neglecting some areas, for example focus on battleships and destroyers, there that tech would be important, but you might overlook it at first glance if you intended to go with cruisers and carriers instead. The same holds true when looking at MTB and forgetting that submarine techs (torpedoes) add both positioning and attack values to MTB's. The Soviet Union is a very good example: Keep your subs up to date, add a dozen MTB's. Then you're able to protect your naval bases and give support to your old battleships at relatively low cost.

Thats why I wanted to have such techs more in a single place next time. To sad imageshaq went  full commercial, my 200+ pics are lost there and I need to reupload them elsewhere.
Put another one up ad ModDD. Here you can better see what I had in mind: 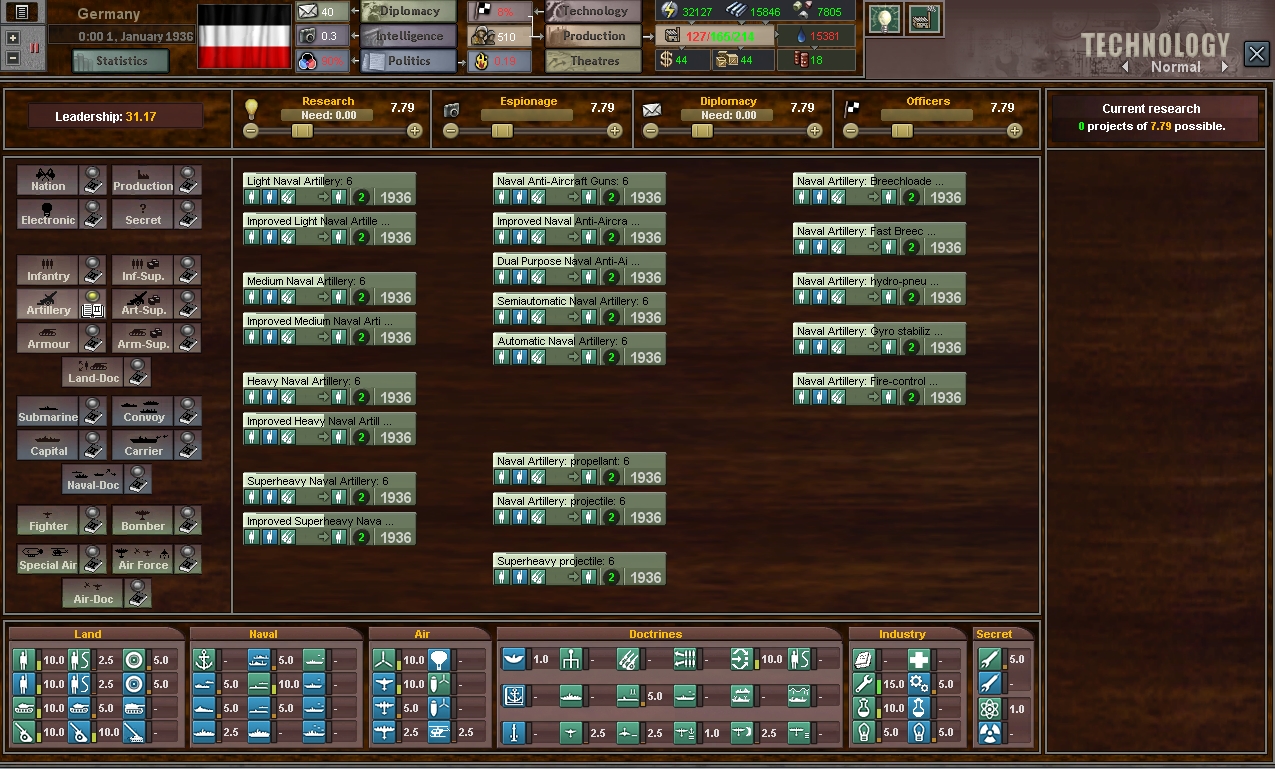 I like that idea. It could also give the techs some breathing space. Easier to take in that way instead of dumping loads of techs into one screen.

Wait? Are you working on a super-campaign starting pre 1914 to 1970ish? That''s something that I have seen tried a few times since HOI came out but it never really worked properly. China and Russia were always problematic areas, primary concern being forced events etc to move history along no matter what the player did etc. AI stagnation or insane amounts of IC after long periods of calm, lack of energy metal and rares for some countries, resulting in 800 IC USA versus 60 IC Japan come 1940 as an example. Events removing random IC US player builds with no warning when reaching some limit, dissent and the like to maintain balance, basically forcing the player to twiddle his thumbs as a democratic nation or go on a rampage as dictator from the get go, punishment via events be damned.

WW1-CW was ever my overall goal. Or even 1870-CW.. Thats also a reason why I reanimated WW1 Mod for HOI3 some years ago.
After the initial phase 2 guys took over and did the first playable version of WW1-mod.
Also the current techtree is reaching back in WW1 timeline because of that. But I was unhappy with it and created the 1001 techtree wich would have given us the same amount of techs per year as vanilla has for ww2.

The problems like IC could be overcome with events or changed game mechanics. It should not be possible to have endless amount of IC etc..
Same for peace treaties after WW1. So taking away units, scaping odl ships.. But all that need much workaround work.
_________________
Play WW-I up to the Cold War! Soon possible with the "AHOI-Mod"! One of the most played Mods for "Hearts of Iron 3"!
Spiele von dem WK-I bis zum Kalten Krieg!  Bald möglich mit dem "AHOI-Mod"! Einem der meistgespielten Mod für "Hearts of Iron 3"!
___- blog -___-facebook-___-twitter-___

I would settle for a couple of hundred new military leaders in the period 1936-1970 for various countries. CHC is one really handicapped country if able to take over China before 1949. Roughly what? 2 dozen army generals, six or so air generals, same for naval. Then you get to 1950 or so - huh where did all the generals go? I suppose the same could be said for political leaders.

I noticed the tech thing as Nationalist China. I loved the fact that I actually had to work to be able to get a decent domestic boat into the water. I had to research a lot of techs, not just three or so to get to 1936. It makes it worth it to stay ahead and up to date as a major, however, and that's a huge one, Hoi3 is really messed up when playing a minor in regard to leadership points, manpower etc. Take Poland as an example and they are what one might consider a regional power with some 34-35 million people in 1936 (32 million as per the census of dec. 31), and they dont even have the manpower to put their reserves on full, that's just nutty especially if you want them around as anything besides a stopcap measure in the short period of 1936 to 39 before Germany and the Soviets take over the area in one way or another.

Gotta show you this - just for laughs - Germany can attack me in the Caucasus via luxembourg it seems.

It is vanilla since TFH.
You know, Germans have been everywhere: https://en.wikipedia.org/wiki/Caucasus_Germans

I knew about Siebenburgen, Banat, the whole Grenzer deal and the Volga community, but I didn't know about the Caucasus Germans, I suppose they were colonists there too, in an effort by the Russian government to gain control over the area. They must have been asked to settle the minute the Russians kicked the Ottoman's and/or the Persians out, if it's during the same period as Siebenburgen etc. Could have been messy if the great powers had been keen on restoring the balance like they did after the whole greater Bulgaria mess in 1878? San Stefano? or so.

Italy has no transports or escorts (4.04)
Where do you add convoys and transports?